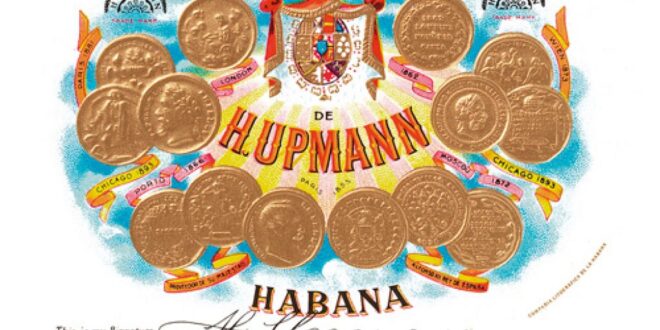 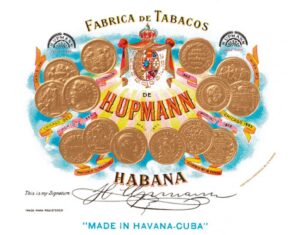 Herman Upmann was a banker from Germany who so loved Cuban cigars that he moved to Havana in 1844 and set up as both banker and cigar maker. His bank closed in the early 1920’s but his cigars live on as a fine example of an elegant, light to medium flavoured Habano.
H. Upmann’s blend is composed exclusively of filler and binder tobaccos grown in the Vuelta Abajo zone.
Gold medals in no less than eleven international exhibitions during the 19th Century can be found on the brand’s labelled boxes.
Characterized by its light to medium flavour, amongst the best known H. Upmann sizes are the Magnum 46 and the Magnum 50, which was introduced in 2008. Other important sizes include the Sir Winston, the Connoisseur No. 1 and in smaller vitolas the Corona Junior and the Half Corona, which was introduced in 2011

H. Upmann is among the oldest cigar brands in existence. In 1843, banker Hermann Dietrich Upmann (16 May 1816 – 1894) arrived in Havana, Cuba, to arrange business affairs for the firm of Gravenhorst & Co., an importing/exporting firm located in Bremen, Germany. Seeing the potential for further importing opportunities, Upmann purchased a local cigar factory at 85 San Miguel Street, Havana, and began producing cigars under the H. Upmann brand in 1844. At the same time he began a banking business, initially catering to tobacco dealers and manufacturers. Hermann Upmann retired in 1890, and was succeeded by his nephew, Heinrich Upmann, who continued operating the business with his partners Heinrich Runken and Theodore Garbade,  until his death in 1914, and was in turn succeeded by Hermann and Albert (Alberto) Upmann, nephews of Heinrich. By 1900, H. Upmann cigar manufacturing had moved to a large building located at 159-169 Paseo de Tacon (later renamed Avenida Carlos III) in Havana, sited between Calle Belascoin and Avenida Carlos III (Tercero). The H. Upmann Bank was at Calle Mercaderes Amargura 1–3 in Havana.

Upmann is sometimes credited with the invention of packaging cigars in cedar boxes to give to their customers. These original boxes were labelled with the H. Upmann name and contained other manufacturers’ cigars, most likely as an advertisement for the operation, until the Upmanns bought their own cigar factory in 1844: the famous H. Upmann Factory, now known as the José Martí Factory, in Havana.