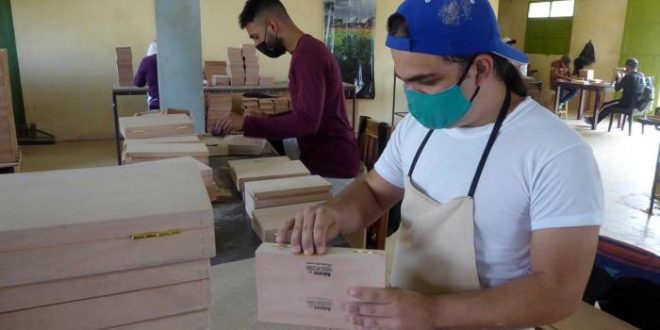 The artisan Jorge Luis Milan, leader of the artistic creation collective Decuba, Arte en Maderas, says that in 2020 they produced 32,000 cases that, until then, had been brought from the other side of the world. 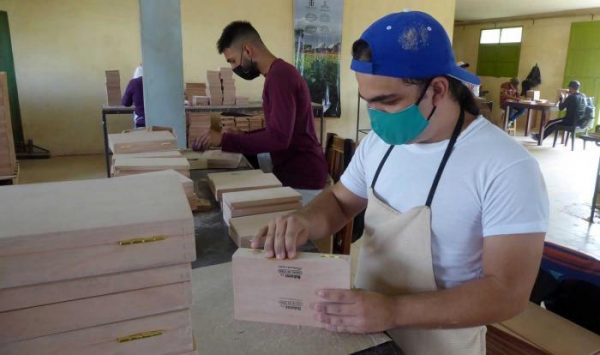 Pinar del Río.– In the small room where the processes culminate, Yoan Manuel Pérez checks the quality parameters. His eyes and his hands are the last filter of a production that will later travel the world under the name of Cuba.

Before arriving at it, each piece was taking shape at the work tables of Leanis, Osvaldo, Raúl and other experts in transforming wood into authentic works of art.

Until not long ago, tens of thousands of cases for packaging Cuban tobacco, like the ones that Yoan Manuel now reviews, were made in China.

Hence the determination with which this young man from Pinar del Río verifies the finish of the pieces, the operation of the hinges and closures, the shine of the enamels, the stamps and the golden emblem of Cohíba.

“One is proud to know that we help prevent imports and contribute a grain of sand to the country’s economy,” he says. I have seen those that were made in China and I can assure you that ours are of the same quality.

The artisan Jorge Luis Milan, leader of the artistic creation collective Decuba, Arte en Maderas, says that in 2020 they produced 32,000 cases that, until then, had been brought from the other side of the world. This year the figure should grow to 40,000.

A MESSAGE FROM CUBANIA

Formed by 27 artists and artisans, and 75 workers, Decuba, Arte en Maderas has been exporting its creations for 23 years to the most select markets in the world.

The project emerged in 1995, with only three members who began to enter the world of humidors in which tobacco is preserved.

Milan recalls that at the beginning they did “very elementary things” and that, little by little, with the help of a teacher from the Pinar del Rio School of Art, they deepened their study of wood and the techniques to transform it.

The fact of living in the land of the best tobacco in the world and discovering the rich culture that surrounds this centennial crop that surprised the Spanish conquerors upon their arrival in America, became a source of inspiration.

First they incorporated the carving, then they undertook the rescue of marquetry, a technique that was almost extinct and of which today they are a reference in the country.

Through the Cuban Fund of Cultural Assets they would achieve the first exports. Later, after receiving the license from Habanos SA for the use of its brands, the collective’s humidors and containers have been marketed in more than one hundred countries.

«The competition is very strong. We have to measure ourselves with companies from China, Italy, France, Spain, Germany, Central America, and that can only be achieved if you have a team of highly experienced creators ”, he assures.

The rescue of techniques and trades that had practically been lost, has allowed them to break through an extremely demanding market and take on the creation of exclusive collections.

The group also has the merit of having donated the income from the pieces auctioned at festivals to the Public Health system. In total, they amount to more than 1,860,000 euros.

Without proper humidity and temperature conditions, tobacco deteriorates. For this reason, for their conservation for long periods, wooden cases are usually used, or special containers equipped with devices to control such parameters, called humidors.

Beyond the utilitarian aspect, the work of projects like Decuba has turned these objects into exquisite works of art.

This is confirmed by Yulianela Bernal, Director of Development of the ARCA Tobacco Container Company, belonging to the Tabacuba business group, who states that, to date, this type of cooperative production is carried out in the country with three creation projects , of which, Decuba is the largest and oldest.

In 2021, together, they will have to deliver 80,000 luxury packages destined for the export of Cuban tobacco.

The quality of their work, the experience and the seriousness to assume the contracts, have been decisive for the realization of this type of alliances, adds the official, and points out that they are currently working on the development of other containers, by new producers potentials.

THE LAST PIECE IS ALWAYS THE MOST IMPORTANT

Creation never stops. The director of Decuba explains that since 2002 his collective has assumed the Habanos collection, which comprises 3,000 pieces whose design is never repeated.

The craftsman ensures that, for his team, the most important piece is always the one in hand. “In 2019, for example, it was the San Cristóbal de La Habana 1519 humidor, which paid tribute to the 500th anniversary of the capital, with the main streets of Old Havana engraved on it.”

The one in 2020 was the 175th anniversary of the Partagás brand. “A beautiful piece, with a new opening and closing system, which was made for the first time.”

Allegorical works of the cultivation of tobacco in the vegas of Vueltabajo, or that resemble heritage buildings in Old Havana or Trinidad, or inspired by personalities of our culture, are part of the extensive catalog that is enriched over the years.

«Each humidor tells a story and carries a message of Cubanness around the world. That is why we have a communication team that investigates before undertaking a project ”.

Despite the prestige gained over the years by various projects like his, Milan regrets that the country continues to go to foreign markets to order containers and humidors, which could be obtained here and save foreign currency for our economy.

The Director of Development of the Company of Containers for Tobacco, national supplier of Habanos SA, considers that the work with these groups shows how much talent there is in Cuba to undertake this type of production.

“There are many artists who ask us to include them in ARCA’s supplier portfolio, so we have no doubts that we are competitive to take on the substitution of these imports,” he says.

For this, together with the desire to give more prominence to national creators, it warns that they must establish expeditious mechanisms to guarantee the timely supply of raw materials and work tools, in order to reduce the times between design, production of the first prototype and its industrialization.

However, the director of Decuba considers that the decision since 2020, to assume with the island’s artisans the manufacture of tens of thousands of pieces that are brought annually from China or Europe, constitutes a step forward.

“It is a concrete contribution to import substitution and a success of the new measures that the country is promoting to boost production chains,” he says.

Raúl Gutiérrez, another member of the Pinar del Río group, also sees it as an opportunity to dispel doubts about how much more could be entrusted to Cuban artists and artisans, in a task that demands talent and rigor, since a single millimeter of difference in a piece , is considered a serious error. “This,” he says, “has to be perfect.”