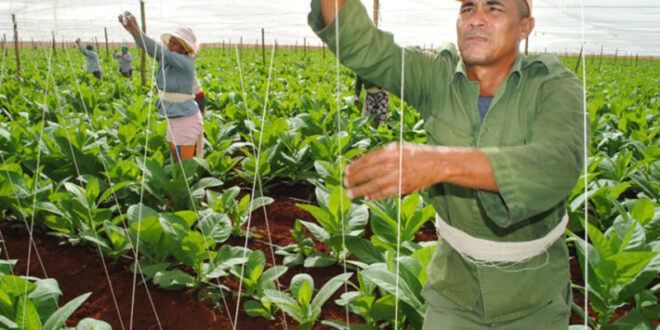 The best tobacco in the world is also planted in Alquízar

The best tobacco in the world is also planted in Alquízar 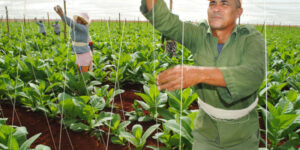 Artemisa is known for its fertile soils and considerable agricultural productions, mainly viands, although from a myriad of strategic lines that increase in variety. However, less is said about how much quality tobacco grows in the territory.
The Cooperativa de Producción Agropecuaria Héroes de Yaguajay, in Alquízar, is an example. In their lands, usually only of various crops, the leaves of the best tobacco in the world gain space.
Alfredo Acosta, its president, maintains that “30 years producing for the people is a feat, especially when various factors threaten work in the fields, some beyond the control of man, others related to marketing mechanisms.
“Despite this, the efficiency of the CPA has allowed us to be profitable since the beginning, in 1983, due in large part to the productive dynamism of our land.”
With 290 workers, of which 62 are women, the cooperative is planting alternatives to respond from the ground up, in the medium term, to government policies aimed at achieving food security. It is a paradigm with its 32 crop variants.
Its 385 hectares include lots for food, vegetables, grains, tobacco, 67 hectares of fruit trees and a livestock module. But, currently, 95% of their income comes from tobacco and potatoes.
“This well-conceived strategy encourages the delivery of around 7,000 tons of various crops each year, 80% contracted by different poles, such as seed companies, tobacco companies and the capital markets. At the end of the year, income from this concept is expected to exceed 15 million pesos, ”says Acosta.
And Augusto Quesada, economist of the CPA, affirms that to date the hiring plan is overcomplished, with a cost per peso of 0.53 cents, which alludes to the profitability of the CPA. “We have produced more than 700 tons of the agreed, above the expected.
“It is worth highlighting its support through technical irrigation. The efficiency of several lines lies in the covering system (with ten cultivation houses and five fields), the application of science and technology and the reduction of irrigation cycles ”.
“However,” emphasizes the president of the Héroes de Yaguajay, “we need more products from the Entomophages and Entomopathogens Reproduction Centers (CREE) and a mechanism that measures quality: although there are some very good ones, this is not always the case”.

The sowing of tobacco is emerging as the bet of the future for the CPA. “It is the best way to maintain profitability,” says Acosta. And they allocate 34.9 hectares to this activity, with five meadows.
“Unlike the rest of the crops, its safe export allows those who harvest it to also receive a part of the payment in foreign currency; For this reason, serving him as the little boy of the house indicates a priority for all workers, ”says Lubeila Quiala, who has spent 20 years in the Héroes de Yaguajay and holds the status of National Vanguard for several consecutive years.
The dynamism is perceived from any area, both in the root balls waiting for the postures and in the kalfrisas for drying. Magalys Núñez, head of the chosen one, says that “to enter the root balls, the hands must pass through a tank with formaldehyde, another with water and detergent and, at the end, through one with water, to avoid bacteria in the positions that have just started. to sow”.
The cooperative has two natural cure gates and ten controlled cure kalfrisas, where the leaf receives specific environmental conditions to increase its quality: the leaves cure in less time and more evenly, with 85 or 86 degrees of humidity and temperatures between 22 to 25 degrees, ideal conditions.
The president of the CPA, along with another colleague, invented this technique more than 15 years ago… and they were the first to apply it in Cuba. These Kalfrisas are equipped with Spanish technology. They have the capacity to store 2,500 to 3,500 cujes each.
“We spent six months in the field and another six in the chosen one, from 5:00 in the morning until 5:00 in the afternoon, day by day and without rest,” adds Núñez. “There are those who believe that our salary is greater than the effort we make; they have no idea of ​​the constancy and essential technique in tobacco planting ”.
Agriculture, that “only constant, certain and entirely pure source of wealth”, as defined by José Martí, stands out as the main economic item of Alquízar and the entire province, due to its production of potatoes, sweet potatoes, taro, fruits and tobacco.
“Our CPA always manages to conclude the benefit of the tobacco planned for the corresponding campaigns, which has made the entity one of the largest producers of the aromatic leaf in the country. But if this crop is our future bet, the primary task is to sow more, to generate exports, with a safe market and a good price.