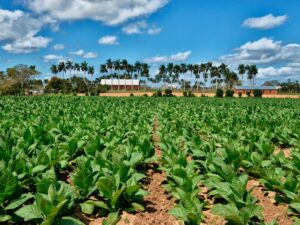 Few things in the world are known to be the best of their kind, a Habano – or Havana cigar is one of them.

The heart of a Cuban cigar is in the tobacco and its taste. Other countries may have acquired or copied Cuban skills and Cuban seeds, but they can never copy the natural gifts of the Cuban soil and the Cuban climate. Combined with the centuries-old culture and knowledge of cultivating tobacco and making cigars, Cuban cigars remain the benchmark for excellence.

As a great wine is defined by its vineyard, a Cuban cigar is defined by the land where the tobacco is grown. The locations for growing Habanos tobacco are strictly limited to certain regions of Cuba and within those regions, only a small number of farms are selected for the exceptional quality of their soil and microclimate, and their skills in growing tobacco.

The other tobacco region in the west of Cuba, where barely one percent of the tobacco growing land is used for producing Habanos binder and filler leaves. It also has good soil for producing seeds.

This area specializes in the cultivation of wrapper leaves, and has been growing tobacco since the early 17th Century.

Cuba’s largest and oldest tobacco producing zone, and part of the area is for growing leaves for the Jose L Piedra and Guantanamera cigars.

Since the 16th Century, the tobaccos that were grown in Cuba had established an unrivalled reputation throughout the world.

Then, at the start of the 20th Century as a new age of botanical research dawned, science was brought to bear on the many different seed varieties in use at the time for the growing of Tabaco Negro Cubano.

The goals of the botanist would be the identification of the original seed’s characteristics that delivered the classic Cuban taste and to find varieties resistant to the many diseases that plagued the farmers.

In the year 1941, Criollo was introduced and remains the basis of all the seeds permitted for the growing of Habano tobacco. Soon afterwards Criollo itself was developed to create a variety called Corojo, bred especially for the growing of wrapper leaves and named after the famous plantation where it was tested.

Today Cuba’s tobacco regions are served by four Tobacco Research Stations which together control all of the seed that the farmers use and continue to preserve and perfect the essence of the only true Cuban seed – Tabaco Negro Cubano.

There are two distinct forms of cultivation that we need to produce the different types of leaf required.

The filler and binders leaves are grown in the open where they can enjoy the full benefits of the Cuban sun so that they can develop the glorious variety of flavors that enable to form the rich and complex taste of a prefer Habano.

Meanwhile, the wrapper leaved will need to be grown in the tapado (shade-grown) fields where they are covered by a Muslin cloth. These cover filter the sunlight and traps the heat so that the leaves are able to grow larger and finer.

The start of the cultivation of the tobacco plants would be from the month of June and July. Different fields would be planted at different times so that the burden of work is spread in each season.

The time for the shade-grown plants (tapado) from planting the seeds to harvest takes 17 weeks and for the sun-grown plants it takes 16 weeks.

First of all the tobacco plants need to be planted in the loosest possible soil, so the fields are thoroughly ploughed before the planting started. Then the seedling can either be grown in special seedbeds covered with straw or in the floating polystyrene seed containers sheltered inside the plastic clad ‘tunnels’.

And after 45 days, the seedlings are ready to be planted out once they reach the height of 13-15cm. And the process called ‘Aporque’ would take place after 20 days to promote the development of the roots.

The top bud of the plant is removed once they reach the desired height so that they can cause the explosion of the side shoots to develop larger leaves. The farmers must make repeated visits to remove it.

The harvest begins after 40 days of planting, but harvesting a single plant would take up to 30 days to complete.

The leaves are picked up at intervals from the bottom up where they are allowed time to develop its remaining leaves. The shade-grown plants require more time as they are taller with more leaves.

After the shade-grown and sun-grown leaves are harvested, they would undergo the process of air curing, fermentation, moistening and airing, sorting and classification, resting and baling and finally aging in the warehouse.

The Air Curing is where the leaves are sewn in pairs and hung on the astride poles that would be placed on the racks in the barn. The ventilation and the light must be monitored so that it can remove the moisture and turn the leaves from bright green to golden brown.

And lastly they are packed into bales, which are labeled with information about the leaves within including their sizes, the year of harvest and the date of the packing. They are then transferred to the warehouse where they are left to age.

The tools used by a Torcedores or Torcedoras (women) for rolling a cigar are: tabla, chaveta, casquillo, guillotine, goma and cepo.
Share