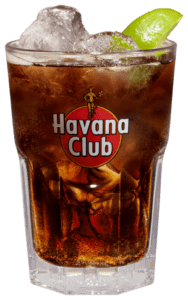 Cuba Libre made with Havana Club Especial simply delicious! Not to be confused with a basic rum and cola, the authentic Cuba Libre needs a generous squeeze of lime to even out the drink’s sweetness. Double aged Havana Club Especial with its hints of vanilla and caramel takes this simple, sociable cocktail to the next level.

How to Make Cuba Libre

At its cheapest and simplest form it’s just a name for a rum and coke with a bit of lime.

But a truly great Cuba Libre incorporates a freshly muddled lime, which adds the fresh flavour from the oil of a lime peel.

Like much of Cuban history, the origins of the Cuba Libre are debated but it’s most commonly believed to have been a toast by American soldiers celebrating the liberation from the Spanish.

It became popular again in the United States when Coca-Cola was one of the only US manufacturers allowed production, and Cuban rum flowed freely.

Both ingredients were cheap and plentiful in America and so it was as popular as it was affordable.

Yet in Cuba Coca-Cola is difficult to find outside hotels and tourist restaurants.

“WHERE TO BUY CUBA CIGARS “