For several months before Day Zero , work was carried out throughout the Holguín Agriculture system in training and preparation, control of workforce, production in process, financial resources and a long list of assurance activities, as it predicted “the size of the wave ”that would arrive, on that date, for many of its business entities.

Regarding the impact of the Regulation in this sector, Vladimir Ricardo Estrada, Delegate of the Ministry of Agriculture (MINAG) in the eastern province, said: “The regulation came to help us financially, economically and productively and our companies have to think about a new strategy of job.

“There have been misunderstandings, direct involvement with producers, which we have processed to find solutions at the local and national level, related to the price of lunch in some entities, electricity rates and the price of water for irrigation, fuels and other inputs necessary to produce, the price of which rose above the value of the product as such and the producers do the clearing.

“However, we have called for reflection on the matter because it is not possible to think of obtaining profits by producing the same as before, we must increase production to be profitable and that must be clear to our producers.

“Currently the country is reviewing the price of electricity, water and supplies, the value of transporting and cooling milk has already been defined, which was a concern and work is being done on modifying the prices of agricultural products (the centralized ones) to grant the possibility to local governments to also form those prices in their territories ”, he said.

Regarding the implementation of this task, Martha Julia Jiménez Rodríguez, head of the Human Capital Department, commented: “One of the greatest benefits is the generation of employment, we have granted 432 jobs, the largest number of them in the agroforestry group and to the Urban Farm 133 people joined.

“Our productive forms need to strengthen their boards of directors, have economics, lawyers, and so on. As a system, we have 1,77 vacancies, some companies have frozen positions, but it is until stability is achieved and the sector’s own prospective development will provide other employment opportunities.

The average salary, in the professional category, for example, can reach up to 5,180 pesos today. Now it is in the occupational categories in the business sector where we have had the greatest conflicts.

“In the distribution of profits, it is necessary to achieve that, in the business regulations, experience and quality are differentiated, with the proper use of the Labor Participation Coefficient (CPL) that allows deciding who contributes more at each level of production and in correspondence establish who receives more, “he said.

However, on this issue, Raciel Aguilera Pérez, general director of the Holguín Tobacco Company, pointed out: “The regulation brought liquidity benefits, because before we had to wait for the money to arrive in various ways and today we sell tobacco to Habanos SA and for Every dollar sold we receive 24 pesos, it is immediate.

“This allows us to quickly face the debts with suppliers, it also generated liquid capacity (CL) from that sale for export, which we deposit in the income and expenses budget to solve any eventuality of the production process without authorization from the Group or the Ministry of Agriculture. .

“But there has been dissatisfaction about the wages of workers, located between groups V and VIII and we have already lost 13 experienced tobacco twisters. A bander, twister, leaf sorter, sorter, takes between 2 and 3 years to be really good and they are classified as simple operators when they should be craftsmen. We have explained it to all instances because there is reason in what is raised.

“We plan to achieve a balance with the distribution of profits, but another problem was generated because, due to a new resolution, it must be quarterly and not monthly. The Tobacco Company is efficient and Resolution 149 of the Ministry of Finance and Prices, authorized MINAG, that companies with profits contribute, of the 50 percent that they have, 30 percent to subsidize companies with debts and that ‘penalty “We have had it for years, but now it affects us more,” argued Aguilera Pérez. 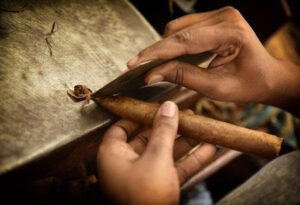 There has been dissatisfaction about wages in workers, located between groups V and VIII, and 13 experienced tobacco spreaders have already been disengaged. Photo: Workers

Although, to a certain extent, they have “surfed the wave” with less difficulty in the Lázaro Peña Cigar Company, there was also disagreement regarding the salary of complex machine operators, who sometimes require up to a year of training to learn how to handle them. well and be really efficient.

On this subject Alexis Heredia Domínguez, director of Human Capital (acting) of the Lázaro Peña Cigar Company, said: “We have transmitted that the payment of profits is quarterly and they have understood it, but there is a lot of expectation in this regard. the profit distribution regulations and we empowered operators and assistants by 30 percent above to form an amount to be distributed among them, with the CPL.

“Another disagreement is that the categorization of the Company only influences the salary of the CEO and the cadres. Technicians, specialists, workers, of a category I company earn the same as those of a Category II or III company, even when there are great differences and requirements to be met between one condition and another.

“But, the ordinance came to do something that we had waited for a long time, which is to remunerate the knowledge, the expertise, the specialization of those who organize, plan, control and not only for the levels of activity. We believe that we have made progress, but we must analyze all these matters at the end of the quarter and see how they have evolved ”, he commented.

Fortunately, on Wednesday 17th at the Round Table, Marta Elena Feito Cabrera, Minister of Labor and Social Security, reported on four new measures approved by the temporary work group of the Government, as a sign that everything that the population raises finds an attentive ear , among which is the salary modification for highly qualified workers in the business system.

He also limited the need for job creation to be in the business sector, especially food production, and explained that little by little it will be ensured that this impact of growth in employment and wages is also reflected in labor productivity. .

The Tobacco and Cigar Companies are located in the select group of the only five companies of the Ministry of Agriculture in Holguín, which closed January with profits, as stated by Yolanda Rodríguez Ramírez, Head of the Economic Department of the MINAG Delegation, who He also asserted that the plans of measures to achieve stability and recovery are being perfected. 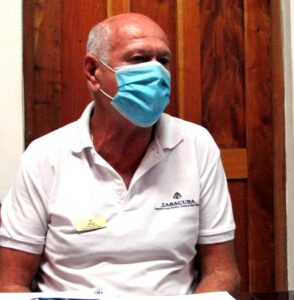 Raciel Aguilera, director of the Tobacco Company of the eastern territory, belonging to the Ministry of Agriculture. Photo: Alexis del Toro

“It is very likely that this first semester, at the organizational and economic level, we will not be able to fully recover, the whole year will be difficult. because we seek to achieve financial balance so that we can really begin to move forward from there.

“The issue of prices is still being ordered and the debate with the forms of production has been extensive and in detail, we have very little to define. Analysis is carried out in each of the productive forms and all state entities are clear about the actions to undertake to overcome the difficulties ”, commented the Economist.

Although the month of January, and what has elapsed in February, do not constitute a definitive pattern for comparisons, because the issue of agricultural product prices steals the spotlight from any matter in this sector, if it must be recognized that, in terms of salary, professionals and technicians have been in a better situation compared to modifications and categorizations of previous years.

It is worth noting, in addition, that in this difficult time of “load accommodation”, with the ordering behind them or perhaps thanks to it, there is a greater presence of meats and vegetables in the already almost rusty little squares, an aspect that has represented the commercialization in the province of 21 pounds per capita in January and the delivery of beans to the grain processing plant that, after a delayed investment, fortunately, has already started operations.

Despite this being one of the driest January since 1960, and the most disastrous, due to the increase in the pandemic and the scarcity of resources, agriculture has planted 5,000 hectares more than the previous year, produced national tobacco and The export and delivery of honey has 80 percent of the coffee harvest and rice production, which initially had so many detractors, is stable and with good results.

Many pending issues remain for this important sector such as the long-awaited swine recovery, to be able to reach, at least that proposal of two kilograms per person, as a base index for a territorial self-sufficiency of progressive growth and the increase of other defining productions in the Protein contributions that the Holguin population needs.

For now, while removing the foam and surfing the Gnarly (Big and difficult waves) of the system, it is vital to pay attention to all the details and seek a solution to the just demands, or an explanation of the issues that cannot be, to “iron out rough spots. ”In the proper conformation of this complex work. Concerns about the ordering there are and there will be and not only in Agriculture, because every work tool will always need to be adjusted, cleaned or calibrated during use, such as a Surfboard.

Previous The province of Pinar del Río, the largest producer of the tobacco leaf in Cuba
Next Holguin tobacco growers maintain productive commitments