The New Generation of Cigar Rollers in Cuba

The New Generation of Cigar Rollers in Cuba

A story where the vocation was never the driving force and the personal interest to get ahead in the most genuine Cuban manufacturing tradition.

Villa Clara.— He had the certainty that his fervor for painting would be the guarantee to master the new trade, which he came to through those unimaginable surprises in life.

By basting the answer about his debut to draw on this board canvas, which he never suspected of creating, he ended up on the path of how he had arrived at that moment.

Thus, the young Luis Orlando Amores Jiménez broke down, in direct and exact language, that it all started because of the need to obtain a living wage: “It was the beginning, and I am very happy with the end result.”

Now, when I see him with agile and precise hands perfectly mastering the cigar that he makes, I ask him if he thinks that his aptitude was innate. 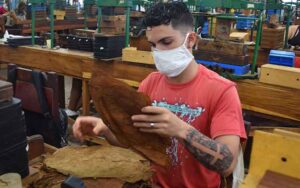 In the ritual of the confection the selection of the layers is vital. Photos: Carlos Rodríguez

Silence while his hands caress the Cohíba, and his voice returns with a confession: «In this job, the termination is the most difficult …

«Vocation, you say? No, I prefer to affirm that it was because of my interest in getting ahead and feeling like the protagonist of the most genuine manufacturing tradition in our country.

Luis is part of a group of very young people who trained the Villa Clara Twisted Tobacco Company, the second largest producer in the country, only surpassed by the one belonging to Holguín.

This year the entity from Villa Clara, which exhibits around 50 percent of a labor payroll from Lazana, will produce more than 14,700,000 units in six processing establishments, located in the municipalities of Placetas, Camajuaní, Quemado de Güines, Santa Clara and Manicaragua. Meanwhile, four other factories support the preparation and completion of the twisting.

There is enough raw material of the best quality, from the plains of Pinar del Río, to capture that amount, stressed Yosbel Betancourt Concepción, director of Production and Development of a company that is distinguished nationally by the quality of its deliveries.

Here they make 14 brands and 123 assortments of the most famous Cuban cigars, such as Cohíba, Romeo y Julieta, Partagás, Montecristo and H. Upmann.

The entity is going at a good pace in achieving the planned program. Until May, it exceeded what was planned for export and the national market, despite being affected by the coronavirus, which involved protecting a part of the torcedores.

In tobacco production, economic locomotive of agriculture, two essential qualities are fully combined: good cultivation of the leaf and equal virtue in the manufacture of tobacco.

The Villa Clara entity has always been alive to guarantee the workforce. Currently they train 185 young people in nine-month courses for the specialty of torcedores, who then go through the different stages of clothing, from least to most complex.

Luis arrived at the Basic Production Unit Constantino Pérez Carrodeguas, in Santa Clara, to pass the course, without his family having any connection with that task: “I found out that he had been summoned and I did not think twice.”

Now he is happy for that decision, and for having learned the trade in this factory, the flagship in the province and a little further.

According to Andrés Martínez Moreno, director of the Business Unit, the young man became an excellent cigar maker. He started with the making of the Mareva brand, a fine tobacco, and now he is very skilled at making the 6th century Cohiba, which requires a lot of quality.

He is grateful to all who have helped him develop in this entity, which this year will produce more than 1,200,000 units.

His ease with the guts, the layers and the key to give life to a magnificent cigar is revealed in the more than one hundred of the highest quality that he leaves ready in eight hours, a figure above the norm.

For Luis this trade becomes art that needs a lot of concentration and patience, so as not to disappoint the best tobacco in the world, harvested in Pinar del Río by virtue of its lands and climate, mysteries that achieve leaves in perfect condition with extraordinary elasticity and flavor.

He confesses that the good cigar maker knows how to get the best out of the leaves through touch and sight, which indicate the quantity of these that a tobacco can have, because not all the leaves have the same thickness and it is necessary to select by intuition the appropriate ones for the layers.

A good specimen has to be between soft and hard. In addition, the tobacco snap, the most difficult, must be carried out with extreme efficiency in order to imprison the layers of the aromatic leaf and make them compact.

«What does my love for painting have to do with tobacco production? Simple: to do it well I have to paint it as if it were a landscape, but with the “chaveta” in hand.