Pinar del Río at a good pace with the tobacco harvest

Pinar del Río at a good pace with the tobacco harvest

When there are 500 hectares (ha) of tobacco to harvest, the vegueros in Pinar del Río hope to complete the harvest of the nightshade on the 20th of the current month, after carrying out a complex campaign, tinged by the sharpness of the US blockade of Cuba. and the intense drought of the first five months of the year.Faced with all the obstacles, the growers of the largest leaf-producing province in Cuba grew and are on the verge of a
good fight, which is a real feat.

According to statements by Virginio Morales Novo,
agricultural specialist of the TABACUBA Group,
more than 27 million 200 thousand cuya from the nightshade have been collected until the end of May and now the excess
humidity due to the persistent rains keeps the release work
stopped, which will continue after the air throughout June.

The collection and benefit processes are a good step, with records
for the stage of 103 and 122 percent, respectively, while
112 selected are open, in addition to 11 mini-selected, with two thousand 307
operators incorporated into the selection and classification of the leaves,
enclosures where the protection measures against COVID-19 are strictly complied with, he pointed out.

At the same time, the preparations for the upcoming campaign are advancing, especially the contracting process with the producers that is already nearing
completion, work is being done on improving the soils and preparing
the land for traditional seedbeds.

The assembly of 40 new tunnels for obtaining
tobacco seedlings was undertaken , which will complete, together with the existing
more than 280, whose positions will be used by
Virginia tobacco plantations and covered, the latter contributing the so-called layers. exportable.

For the 2020-2021 harvest, Pinar del Río has a planting plan
amounting to 19,769 ha, while it continues to expand its infrastructure, with the repair and construction of new rooms, a task that is progressing, but these days at a slower rate by the rainfall of this rainy season.

Pinar del Río contributes to the twisting industry all of the capes
and guts, in addition to volumes of layers, sheets that cover the famous Havana cigars. 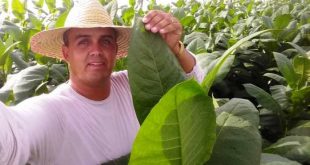