Difficult times with production of cigars in Cuba

Difficult times with production of cigars in Cuba 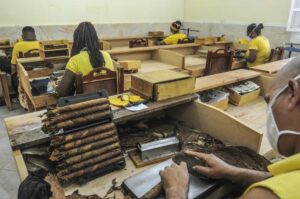 Despite the spread of the pandemic, Cuban tobacco companies do not renounce compliance with the plan of the year, aware of their contribution to the country’s exportable rubles

Nelsa has been dedicated to her vocation for more than 50 years. She works more than 12 hours a day, but she doesn’t tire. She saw the feminine strength grow in the tobacco sector, while taking experience as a torcedora. As in those early days, she continues to be the first to arrive at work, even in the midst of the pandemic.

«Even though I am aware of my age and the situation with the covid-19, here I am, by vocation, but also by commitment. I comply with all the protection measures and I do not stop doing what corresponds to me, because my contribution is important, like that of each one of the tobacco companies in the country, “he exclaimed with pride.

Despite the fact that 1,045 workers in the sector on the Island are currently in their homes because they are considered vulnerable to the new coronavirus, according to Gustavo Rodríguez Rollero, Minister of Agriculture, recently at the Round Table; Those who, like Nelsa, are still working, strive not to give up a single unit, in order to twist the 90 million tobaccos planned for this 2020, and which have a deserved place in the world market.

An example of efficiency is represented by the twisted tobacco company El Laguito, producer of the emblematic and famous Havana cigar brand Cohíba, in the capital, where its more than 200 active workers, including Nelsa Leonard Delgado, have managed until the closing of the In April, 100.2% of the planned physical tobacco units and 115% in values.

According to Pedro Luis Pérez Acosta, director of the entity, these results have been very encouraging.

“With the presence of the pandemic, several measures were adopted that are aimed at complying with the technical-economic plan, taking into account what that production destined for export represents for the country’s economy,” he said.

The executive exemplified that the working day has been lengthened and non-working Saturdays have been activated, even workers show their willingness to take advantage of Sundays.

«The factory maintains its vitality. We also have assured the raw materials for the fulfillment of the May plan, in order that the Tobacco Day is a reason to celebrate, “he added.

WITNESS AND PROTAGONIST of this time

According to Pedro Luis Pérez Acosta, the leadership of the National Union of Agricultural, Forestry and Tobacco Workers (Sntaft) has joined the will of the workers of this entity, which works together with the Ministry of Agriculture and the business group Tabacuba in order to ensure the logistics of the productions and other alternatives for the union movement, to stimulate the efficiency of each worker.

In this regard, María González Vázquez, torcedora and secretary of the union office of El Laguito, stressed that the workers of the company will even contribute a week of vacation, because the premise is to exceed what is planned from the daily effort of each one.

Yaremis Pradera González, member of the National Secretariat of Sntaft, said that for the tobacco company there is no fatigue, it is a historical legacy, that not even the pandemic can undermine.

Certainly the patriotic inheritance of the tobacco growers of Tampa and Key West, who at the end of the 19th century decided to contribute their scarce resources to the cause for the independence of Cuba from the Spanish colonial yoke, promoted by the Apostle, is alive in the effort of the current workers who, like Nelsa Leonard Delgado, forget the fatigue and the risk posed by the pandemic to maintain the vitality of one of the most important exportable regions of the Cuban economy.