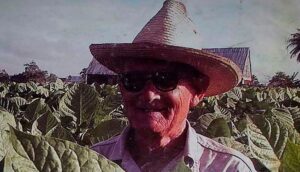 José Martí said that “each one upon dying will show heaven his
finished work , his written book, his shining plow, the ear that he reaped, the
tree that he planted. They are the rights to rest. Sad the one that dies without having done work ”.

And perhaps for these reasons, Antonio left so calmly, with a great finished work that left his children inheritance: his example.

A simple man, with a humility that penetrated to his bones, he loved his family and the earth like no one else and lived consecrated to these two great loves.

He was born in 1925, at a time when instruction in Cuba was a luxury that the poor could not afford, which is why, while still an 11-year-old “pigeon,” he was already accompanying his father on his Las Cruces farm in San Luis. , Pinar del Río, to sow, water, weed, weed and collect tobacco, among other tasks inherent to the cultivation, of which he fell in love and dedicated until his last breath.

After the revolutionary triumph that dignified the peasant, he became famous, because as a result of his perseverance, he reached 59 percent of the layers that cover the renowned Cuban cigars, occasion in which he lost his last name overnight, since the People started naming him Antonio 59 percent.

He professed infinite love to his family and especially to his two descendants, to whom he showed the way to become good people and taught them to be honest, caring, to love others, to walk the life of the hand of the modesty and steep in times of adversity, among many other values.

Beloved and respected throughout the region, he extended his hand to everyone who knocked on his door, especially to those who called the dark-skinned people of the savanna, families who in the midst of batistato had no food to bring to their mouths.
With each triumph of his children, his pride as a good father emerged, especially when the eldest of his offspring successfully completed his higher studies at the University of Havana. So he used to say … the Revolution is great.

And during the several years of fighting cancer, he never stopped,
with a lot of work, going to the fertile plain in the morning and sitting on the guardrail, from where he led his troops, until one bad day he couldn’t do it.

And then, after the kiss of his children and wife, Antonio Padilla Valdés, my father, the best of parents, left that calm June 30 with his shining plow, the mowed spike, his planted tree and with his great work of infinity love made, ready to show heaven.