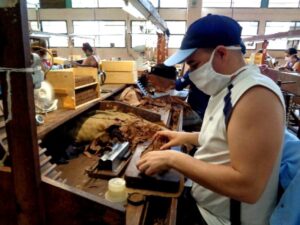 Jainier Arencibia, a young torcedor who often doubles his daily norm, assures that tobacco is a handicraft to which you must put your heart.
Photos: Lianne Fonseca

The young cigar roller Jainier Arencibia Cruz, while deftly assembling a “bonche”, in which is the mass of what will be, in short, a good example of Havana and It will have the aroma and flavor that distinguishes the traditional Cuban cigar, considered one of the top ten luxury items in the world. ”

While the midday sun warms up the halls of the UEB Jesús Feliú Leyva No.2, in Holguín, in the Ringed area, Edelmis Cruz García deals with an assortment of Dumas tobaccos and works hard to fit the rings perfectly. “I have been doing this work for 31 years. The ring must be even and fair, because it gives presence. You have to do it with delicacy and love so that they do not break. The daily norm is two thousand three hundred and I have come to band up to four thousand 500 tobaccos. My fingers don’t tire, “he says.

At the same time, in the Adornado area, Yaquelín Jeada Agra transforms a blank box into a work of art. While placing a cover engraved with the image of Romeo and Juliet and arranging the so-called fillets, stringers, coastal and other ratings, he puts a face to the tobacco that from Holguín will travel the world. 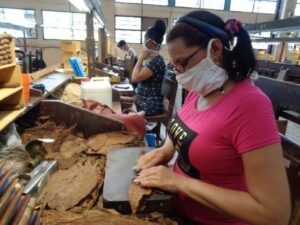 The quality and good presence prevail in the cigars made in Holguín.

Everything indicates that the “Feliú Leyva No.2”, belonging to the Holguin Tobacco Gathering, Processing and Twisting Company works as a well-geared system. Inside, more than 400 women and men, mostly young, take pride, not only in knowing the secrets to a centuries-old practice in Cuba, but also in raising with their own hands an exportable ruble essential to the country’s economy. 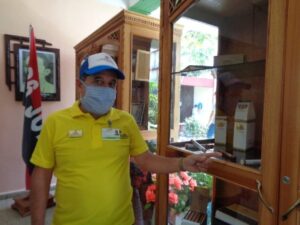 Méndez Sarmiento, director of the factory, stresses that the group does not resign from complying with the 2020 plan, which includes the sale of 5 million 921 thousand 800 tobaccos.

Jorge David Méndez Sarmiento, director of the factory, states that the cohesion of the collective and their desire to work are the main reasons why there are very good results in the production of twisted tobacco destined for export. He affirms that in 2019 overcompliance was generated, when more than five million 757 thousand units were sold for a total value greater than 46 million pesos, figures that allowed reaching an average salary of 1,825 pesos.

Raciel Aguilera Pérez, CEO of the company, stresses that as the largest producer of twisted tobacco in the province and one of the largest of its kind in the country, the UEB manually makes more than 70 different assortments under 11 internationally recognized brands and produces a daily average of more than 20 thousand tobaccos. And the best thing is that its financial contributions have not been reduced even under the siege of the Covid-19.

In this regard, Méndez Sarmiento emphasizes that even in the circumstances imposed by the new coronavirus, which has affected more than one hundred UEB workers from one or the other, it was possible to close the month of April with a production of two million 34 thousand units and sales for values ​​amounting to 15 million 214 thousand 900 pesos.

This means an over-fulfillment of the plans to date and a good omen in terms of the possibilities of meeting the figures agreed for 2020, the year in which the sale of more than five million 921 thousand tobaccos is contemplated, which will be used as a variety of countries.

Achieving such dividends has been possible thanks to the efficiency in the use of raw materials from the center and west of the country; to the experience of the group, which always manages to overcome adversities such as the lack of ratings and drawers; and to the individual disposition of each worker to comply with the necessary physical isolation in the galleys without this implying a decrease in production rates.

The administrative explains that as between each torcedor there was a distance of less than one meter, at the request of the labor collective, the jobs were rearranged. “We conditioned premises covered by other activities, we compressed warehouses and areas where there were no workers and we expanded. You will see that even on the podium there are sitting cigar makers ”. 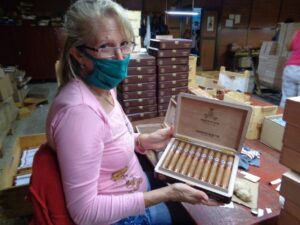 “We did not want to stop working. The economy must be pushed forward. And we are an important line ”, Neida Antúnez Antúnez, the union leader, would finally say, as if summarizing how much the projection of a group can make a difference”

Cuba production of cuban cigars is keeping up with the demand. 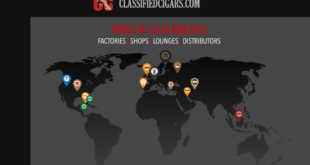