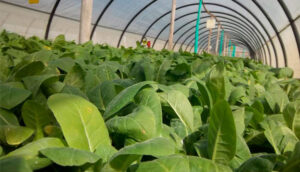 The municipalities of San Luis and Consolación del Sur, both members of the so-called tobacco massif, report a good step in the benefit of the Virginia variety, destined to satisfy the demand of the cigarette factory that is built in the Special Development Zone Mariel (ZEDM ).

According to Virginio Morales Novo, agricultural specialist of the TABACUBA Group, so far these tasks have yielded good quality of the leaves of the so-called blond tobacco, while in the chosen centers, before the COVID-19 all preventive measures are adopted in order to to the protection of labor collectives.

The sowings agreed in the current campaign amounted to 300 hectares, distributed in 200 in Consolación del Sur and the rest in San Luis in the Santamaría area, where years ago their tillage was traditional, but over time that practice ceased.

The Project to rescue this variety, started in the 2016-2017 race, today it has modern technologies for the planting, irrigation and cure of nightshade.

At the end of the previous year, a site with 10 controlled leaf cure chambers was inaugurated at the Santa Clara point in Consolación del Sur, structures that were made with light materials, temperature insulators to maintain the properties of the leaf.

These are designed to cure in seven-day cycles, while work will continue to build another 50, which will use diesel, after energy sources such as liquefied gas, biomass and solar energy.

The UBPC Julián Alemán was the initiator of the Virginia project, a structure where technologies favorable to cultivation were introduced, with mechanized procedures and gradual progress in yields.

Producers from Santa María have reiterated to the press, since the start of the war, that given the limitations with fuels, there was no room for discouragement, and as a strategy they increased the use of animal traction in land preparation and in different tillage tasks, in order to promote savings and already today optimistically see the results of the effort.

In Cuba, the sowing of the tobacco variety dates from the 30s of the last century in the westernmost plain of Pinar del Río and, mixed with Burley, with tradition also in Pinar del Río, it is used in the production of cigarettes soft.

Due to the experience of the harvesters and the suitability of the plains, Pinar del Río is the only Cuban province that grows blond tobacco.

Along with the tasks of the current tobacco contest, the conditions are prepared for the next campaign, in activities such as contracting with producers, who will have the challenge of planting 19,769 hectares; the location of the seedling areas and the improvement of the soils.

The westernmost province of Cuba contributes to the twisting industry all the capes and casings, in addition to volumes of the so-called exportable layers, sheets that cover the famous Havana cigars, which are in great demand in the world