There is good tobacco in Pinar del Río

Despite all setbacks, there is good tobacco in Pinar del Río, says veguero 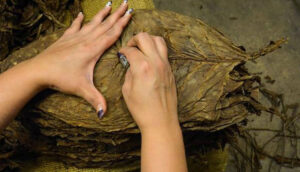 The current tobacco campaign since its inception faced setbacks, challenged with will and consecration and today in Pinar del Río one can speak of a good harvest and optimism prevails in each of the producers, said Tomás Vega, an experienced farmer.

Trump tightened the fence, which created the crisis with fuel and we then multiplied the teams of oxen, the effort, the attention to the plantations, accompanied by the good weather in part of the time and then we began to suffer from the drought, But the guajiro always looks for alternatives, even to protect us against the new coronavirus, he said.

On the other hand, I feel encouraged because something tells me that this week we will be surprised by a good downpour, said the farmer from San Luís, a municipality that is part of the so-called tobacco massif, smiling.

I sowed in two moments in a staggered way, I have already finished collecting the first plantation, and by the good drying of the leaves sheltered in the priest’s house and the freshness of the one that remains in the furrow, I can predict good quality and yield, he said This simple man excited, on several occasions selected the best producer in the municipality, recognized by many for the cradle of tobacco in the country.

Virginio Morales Novo, agricultural specialist of the TABACUBA group, told the ACN, his good appreciation of the contest, in which 19 million 670 thousand tobacco cujes have already been collected with the closing of April 10 and for the present decade the estimate is around two million 59 thousand.

He specified that more than 5,800 hectares (ha) remain to be harvested in the fields, which means that the tasks will continue until the end of May.

He confirmed that the collection is progressing and also the benefit in the 107 selected and 12 micro-selected activated in the territory, where preventive measures against COVID-19 are a priority, and at the same time the construction of rooms is progressing, with 491 completed, 865 in different phases of construction, while the repaired ones approach 1,800.

The people of Pinar del Río also develop the contracting process with a view to the next tobacco campaign; 17 thousand 365 ha are already agreed with the harvesters and they continue the work, since the plan for the next stage will amount to 19 thousand 769 ha and 19 thousand 304 tons of tobacco.

This time the largest province producing nightshade in the nation planted 18,113.7 hectares this time, 17,772 of which were harvestable, as losses were reported for different reasons, such as rain at first, diseases and drought.

Pinar del Río guarantees the twisted industry in Cuba all of the capes, guts and volumes of the so-called exportable layers, sheets that cover the famous Havana cigars.