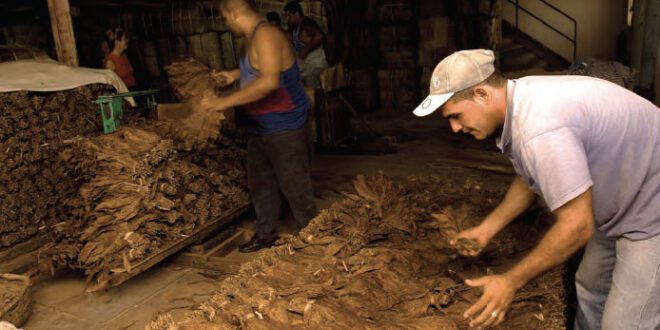 Air curing for Fillers and Binders

Sun-grown leaf for Fillers and Binders

Sun-grown leaf for Fillers and Binders

Filler and binder leaves on the other hand are subjected to a much more complex and extensive process than wrappers, including several fermentations as is revealed below.

1- Air curing for Fillers and Binders

All filler and binder leaves are cured in the farmers’ traditional Curing Barns. As with wrappers, the leaves are sewn together and hung over poles and, throughout the curing process as the leaves lose humidity, the poles are raised progressively to the upper part of the barn. Again the ventilation and light are adjusted constantly to allow for natural variations in temperature and humidity.

This process lasts for a minimum of 50 days, with longer periods for the leaves taken from the higher levels of the plant.

2- First Fermentation of Fillers and Binders

Still in the farmer’s Curing Barn, fillers and binders are subjected to their first fermentation. The leaves from each pole are gathered into gavillas then placed in piles and covered in cloth with a view to reducing further the natural humidity still contained in the leaf after its curing.

The fermentation process is precisely the same as takes place in a garden compost heap. Moisture and compression combine to generate heat. Constant supervision is required to ensure that things do not go too far.

Fermentation is essential to the smoking quality of the cigar. It sweats out impurities in the leaf, smoothing the flavour and reducing acidity, tar and nicotine.

This first fermentation takes a maximum of 30 days to complete. The leaves taken from the top levels on the plant need longest periods of time because they are thicker and richer in oils.

3- Sorting and classification of Fillers and Binders

It is at this stage that the Empresa de Acopio y Beneficio del Tabaco buys the filler and binder leaves from the farmer and assumes the responsibility for the next phase which takes place in the Escogida or Sorting House, where the leaves are taken after the first fermentation in the curing barn.

The leaves are first moistened and aired to make them easier to handle and less vulnerable to damage during the classification. Then they are sorted and grouped in the four essential categories of flavour or tiempos  that will be combined in the blends of filler for Habanos: medio tiempo ,ligero, seco  and volado . Volado leaves are collected from the lowest part of the plant and have little strength. They are also referred to as fortaleza  1 (Strength 1) and the biggest and best of them are classified as binder. The seco leaves are taken from the middle of the plant and are renowned for their aroma. They have medium strength (Fortaleza 2). Ligero and medio tiempo leaves come from the top of the plant and are the strongest in flavour (Fortalezas 3 and 4).

After this strict process of selection that is essential to the Habano, only around half of all the leaves will make the grade and be classified as medio tiempo, ligero, seco, volado and binder that will finally be used to make Habanos.

4- Second and third fermentations of Fillers and Binders

Following classification into the tiempos or fortalezas that will be used in the preparation of blends in the factories, the leaves continue their long process of refinement.

In a building called the despalillo  or Stripping House where they have been taken from the Sorting House, the medio tiempo, ligero and seco leaves undergo a second fermentation (sometimes also known as the pre-stripping fermentation) in pilones or piles for a period of 15 days. The volado and binder leaves, which are thinner, are only aired at this stage.

Next all the filler and binder leaves are moistened in preparation for the tasks of stripping and pressing. The sure fingers of the despalilladoras strip out the lower portion of the central vein in each leaf of filler or binder. Then the leaves are stacked in small piles and pressed between boards.

6-Airing filler leaves on racks after the final fermentation.

Subsequently, all the leaves undergo another fermentation. This will be the second fermentation for volado and binder leaves, and the third for medio tiempo, ligero and seco leaves. The amount of time taken depends strictly upon the type of tobacco being 15 to 25 days for volado and binder, 45 to 60 days for seco and around 90 days for medio tiempo and ligero. For these fermentations the tobacco is stacked in piles known as burros covered in cloth, and the process is triggered by the water content retained in the leaf after the moistening that took place before the stripping.

The temperature during fermentation must be watched with great care. When it gets too hot, the pile is broken up, the leaves are allowed to cool down and the stack is rebuilt the other way round (bottom leaves to the top, top leaves to the bottom). This may happen several times in the course of the fermentation.

7- Baling and ageing of Fillers and Binders

After this last fermentation, the leaves are aired on racks for a few days, then packed and transferred to the warehouse for the final patient process of aging.

The fullest-flavoured leaves (ligero and medio tiempo) are aged the longest – for a minimum of two years. Meanwhile the lightest-flavoured leaf is aged the least. Like a fine wine, the longer the leaf is left to mature, the better it will be.

Filler and binder leaves are packed in hessian bales called pacas. Each bale carries a label with all the information about the leaf it contains including its size, the year of harvest and the date of packing. In addition the labels on pacas indicate the leaf’s tiempo or fortaleza as well as both the Escogida  and the despalillo  where the binders and fillers were processed.

The labels indicate the specific local character of the leaf which is the key to the distinctive blending of each of the sizes in all the Habano brands. It will allow for the creation of the blends that will be put into practice by the Maestro Ligador  – Master Blender – in each of the factories in Cuba.