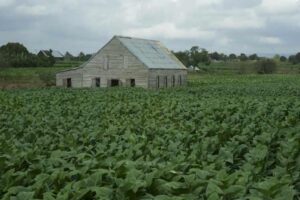 Havana, May 26 (Prensa Latina) Cuban tobacco agribusiness authorities stated today that this sector maintains its activity, despite the impact of Covid-19.
A report from the Granma newspaper added that amid the complex situation caused by the disease, the production of exportable tobacco does not stop.He

pointed out that tobacco contributed nearly 270 million dollars to the Cuban economy in 2019, due to exports.

The director of the Experimental Station of Tobacco of San Juan y Martínez, doctor of science Nelson Rodríguez, assured that the dynamism is due to the combination of four fundamental factors: climate, soil, experience of farmers and varieties that are planted.

He insisted that if someone took the Cuban seeds to any other place, they would not achieve the same result, and given the relevance of the product, the activity remains especially in the west.

He stressed that despite the ravages of the measures of economic, financial and commercial barriers of the United States against Cuba for more than 50 years, Cuban tobacco is currently spread by 150 countries and the demand does not stop growing.

For this, in the midst of the complex situation caused by the pandemic, the production of exportable tobacco does not stop, he said.

He reported that this line generated 270 million dollars the previous year, a sum that represents 70 percent of Cuban agriculture exports.

He highlighted that behind those figures, Las Vegas in Pinar del Río have a decisive weight.

From them, and more precisely, from the Vueltabajo tobacco massif (municipalities of San Juan and Martínez, San Luis, Pinar del Río and Consolación del Sur), all the raw materials that make up the Habanos come out, except for the cape, which is also obtained in other territories.

He said that today the province is also dedicated to the harvesting of the 2019-2020 harvest, to the benefit of the first collected leaves and to the preparations for the next campaign. For his part, the specialist of the Tabacuba Business Group, Virginio Morales, ruled that in the field there are still 1,800 hectares distributed in nine of the 11 municipalities.

He reflected that without neglecting the protection measures established to avoid contagion with the new coronavirus, 108 selected and 11 micro-selected remain open.

At the same time, the 1,190 hectares that will be destined to seedbeds in the coming harvest and the assembly of 40 new posture tunnels are carried out.

In total, he reflected, for the next campaign it is intended to plant more than 19,700 hectares, an area very similar to that foreseen in 2019-2020, with which it is confirmed that the adjustments to the economy plan, motivated by Covid -19, does not include the reduction of tobacco exports.